www.augp.edu.in
His Eminence Dr. Madhu Krishan  The Fonder and Chairman Of " Academy Of Universal Global Peace"- " AUGP " and  Dr.Shefki Hysa The Governor Of Diplomatic Mission -DMPP  Holding Strategic Meeting with Mr.Muhamet Malo , The Chairman Of Sports and Youth Television Of Europe

Posted on 21 April 2014by krahu
Muhamet Malo was born on 13th May 1957 in Tirana, Albania. He passed his childhood in his birthplace where he finished his primary and elementary school. He finished his high school studies in the Vocational High School “Josif Pashko”. After finishing high school, he conducted several trainings and courses on business management.
Muhamet Malo has been one of the most remarkable sportsmen in wrestling and has been distinguished during his sports career. From 1971 to 1977 he started his wrestling activity with the sports club “The student”. In 1977 he was wrestler in the sports club “The Partisan” for two years, until 1979. From 1979 to 1990 Muhamet Malo was wrestler at the sports club “The student”.

Muhamet Malo, Honorary Advisor of DMPP
Muhamet Malo has been contributor and donor of many sports federations especially in heavy sports such as weightlifting, judo, wrestling, athletics etc,   in national and international activities of Albanian sports. He has also sponsored many organizations of orphans, blind people and paraplegics. For these reasons, he has been decorated and honored with Certificates by different International organizations.
In 2004 Muhamet Malo received as acknowledgement the title Sport et Media CIO-IOC by the Albanian Olympic Committee. Muhamet Malo was the second personality to receive this title after the president Rexhep Mejdani. On 23rd October 2005, Muhamet Malo was acknowledged by the Albanian Athletics Federation for the contribution given in the actualization of the Marathon of Tirana, Memorial of Mother Teresa.
In 2006, Muhamet Malo received acknowledgement as President of  “Dajti Ekspres” company, as one of the best businessmen of the year by the Albanian Center on Investigative Journalism and the Chamber of Commerce of Tirana. In October of the same year, he was acknowledged in San Marino by the European Weightlifting Federation. In 2nd December 2007, the National Institute of Albanian Orphans Education acknowledged Muhamet Malo, as a dignified Representative of the Albanian business for the valuable contribution in help of the people in need especially orphans.

Muhamet Malo, Honorary Advisor of DMPP
In June 2009, he was conferred an Acknowledgement Certificate for the special contribution during years for the values preservation, creation and consolidation of the school Bajram Curri. In October 2009 as President of Dajti Ekspres Company he is evaluated with the price “Albanian Leader 2009”. In 2009, Muhamet Malo received also a Medal by the European Wrestling Federation.
During 2011, Muhamet Malo received acknowledgment by several institutions such as: Albanian Weightlifting Federation, Albanian Judo Federation, Albanian Athletics Federation and Albanian Weightlifting Federation. He was also acknowledged by the Albanian Blinds Association and was also appointed Member of the American Chamber of Commerce in Albania.
Muhamet Malo, as an intellectual erudite with a noble and charitable heart, has helped a lot the social classes in need. He is one of the most committed peace missionaries in the International Lobbying Organization Diplomatic Mission Peace and Prosperity, accredited by UN, EU, USA. In 2011, Muhamet Malo started collaborating with DMPP as a Honorary Member of this mission.In 24 November 2012 Muhamet Malo received acknowledgement by the 5thInternational Tour in Wrestling Adem Jashari. In November 2013 he was acknowledged by the Federation of Judo for his continuous contribution and support for the judo sport in Albania. In 2013 the Weightlifting Federation gave him a degree for his valuable continuous support in the development of weightlifting and the sponsorship of the federation and European and World Championships.
Since 2014, Muhamet Malo is an Honorary Advisor of this mission that operates in the Balkans and worldwide for peace and prosperity in help of the countries under development, according to the principles of the American democracy. 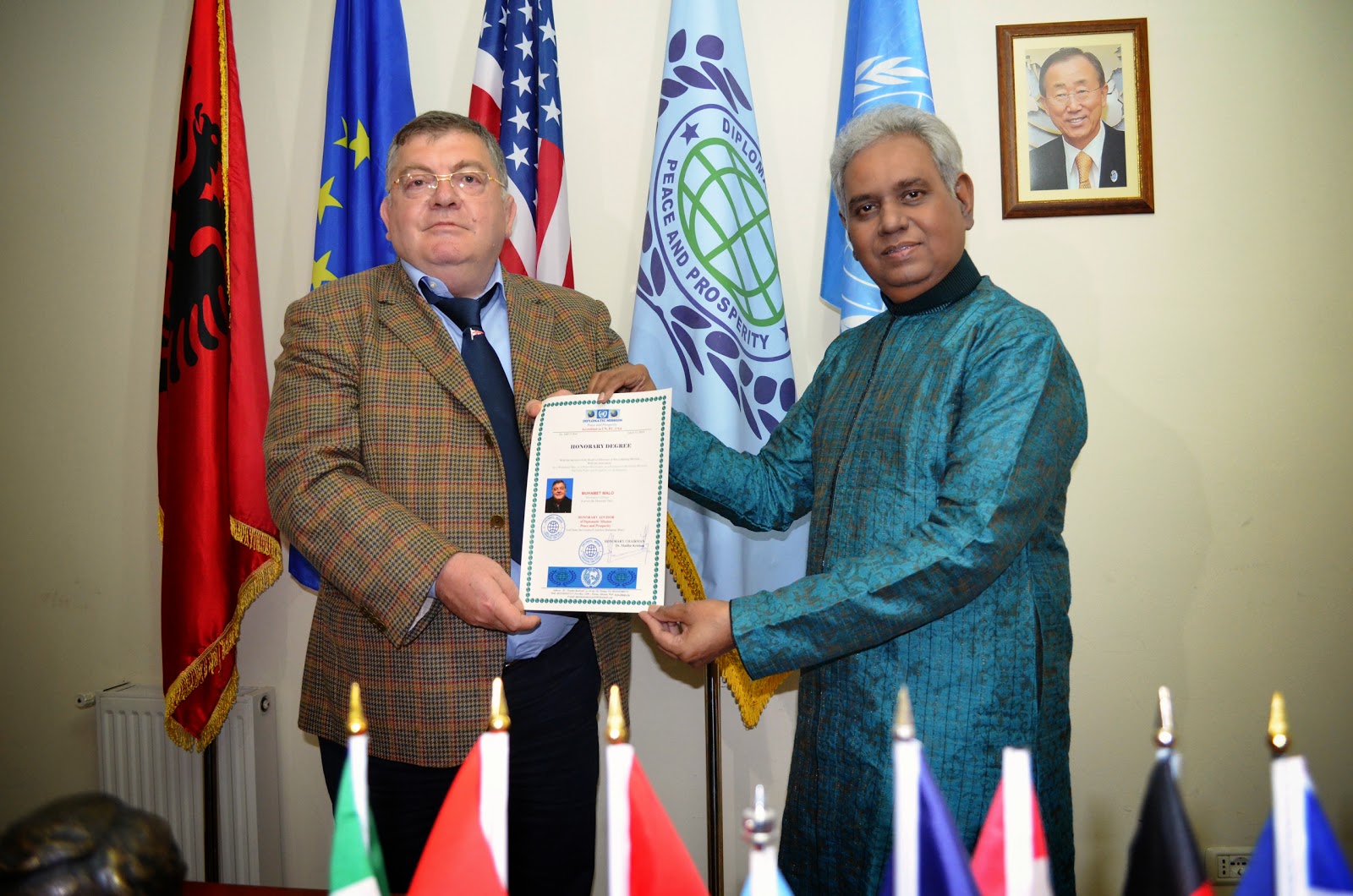 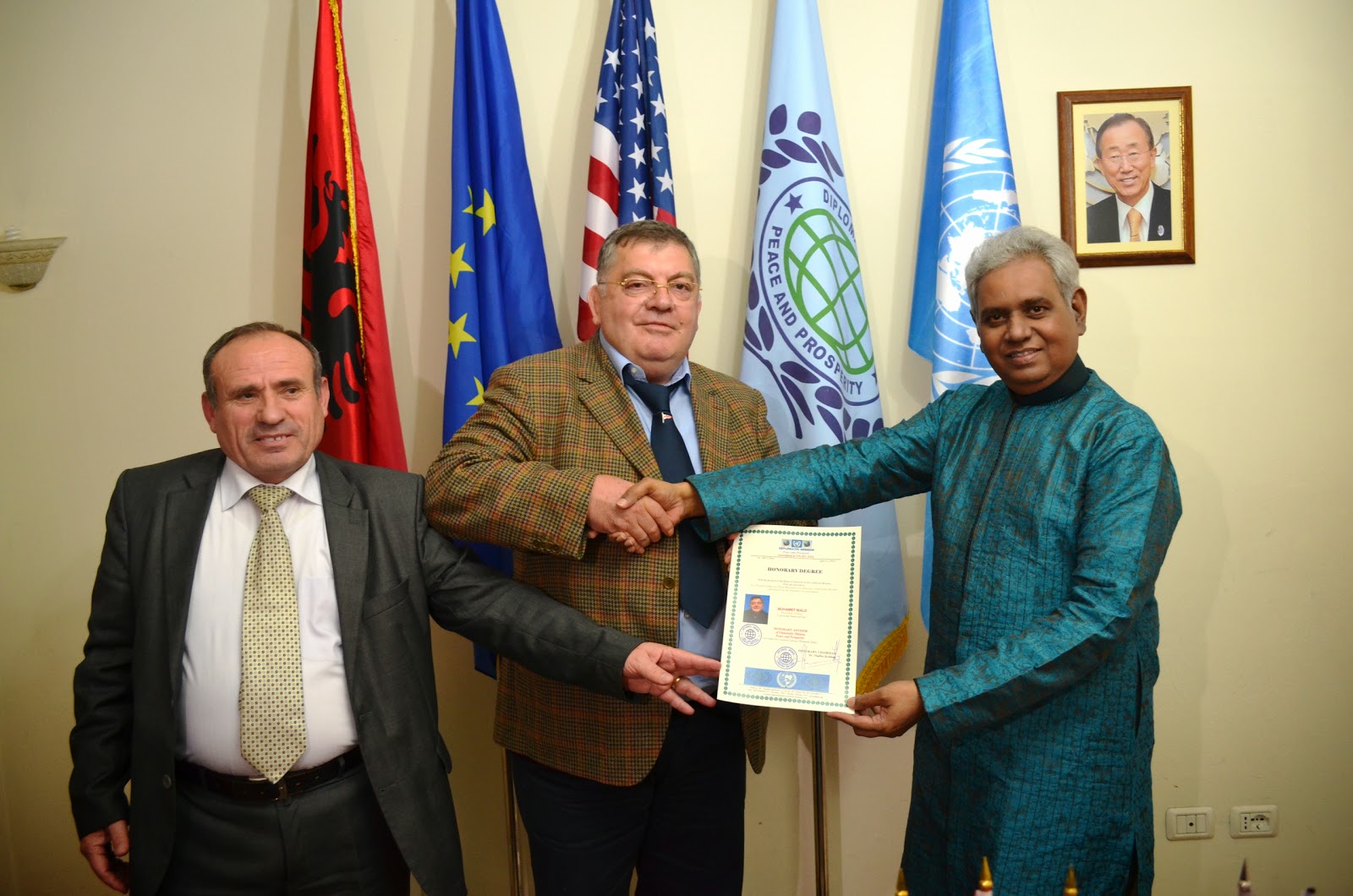 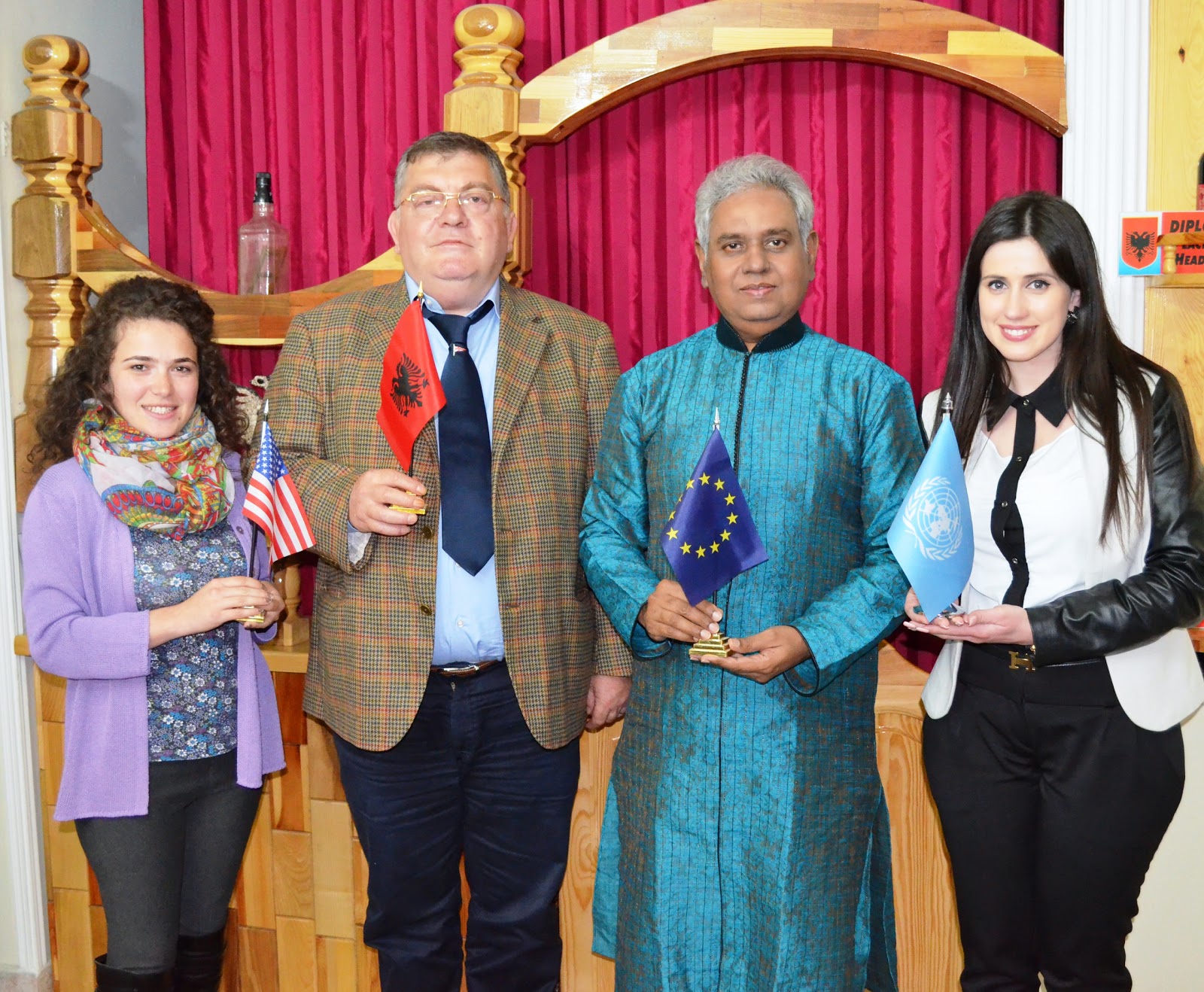 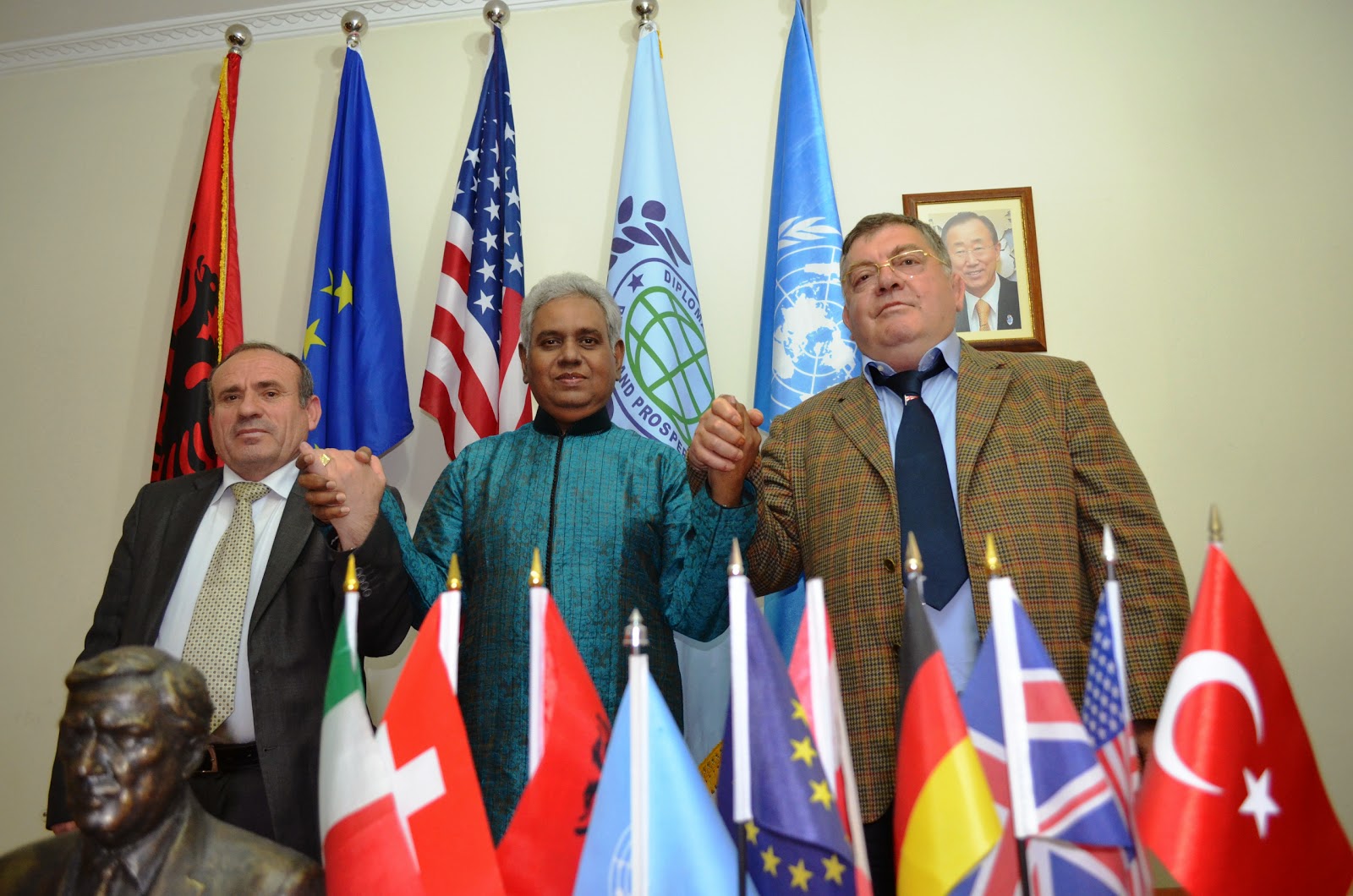 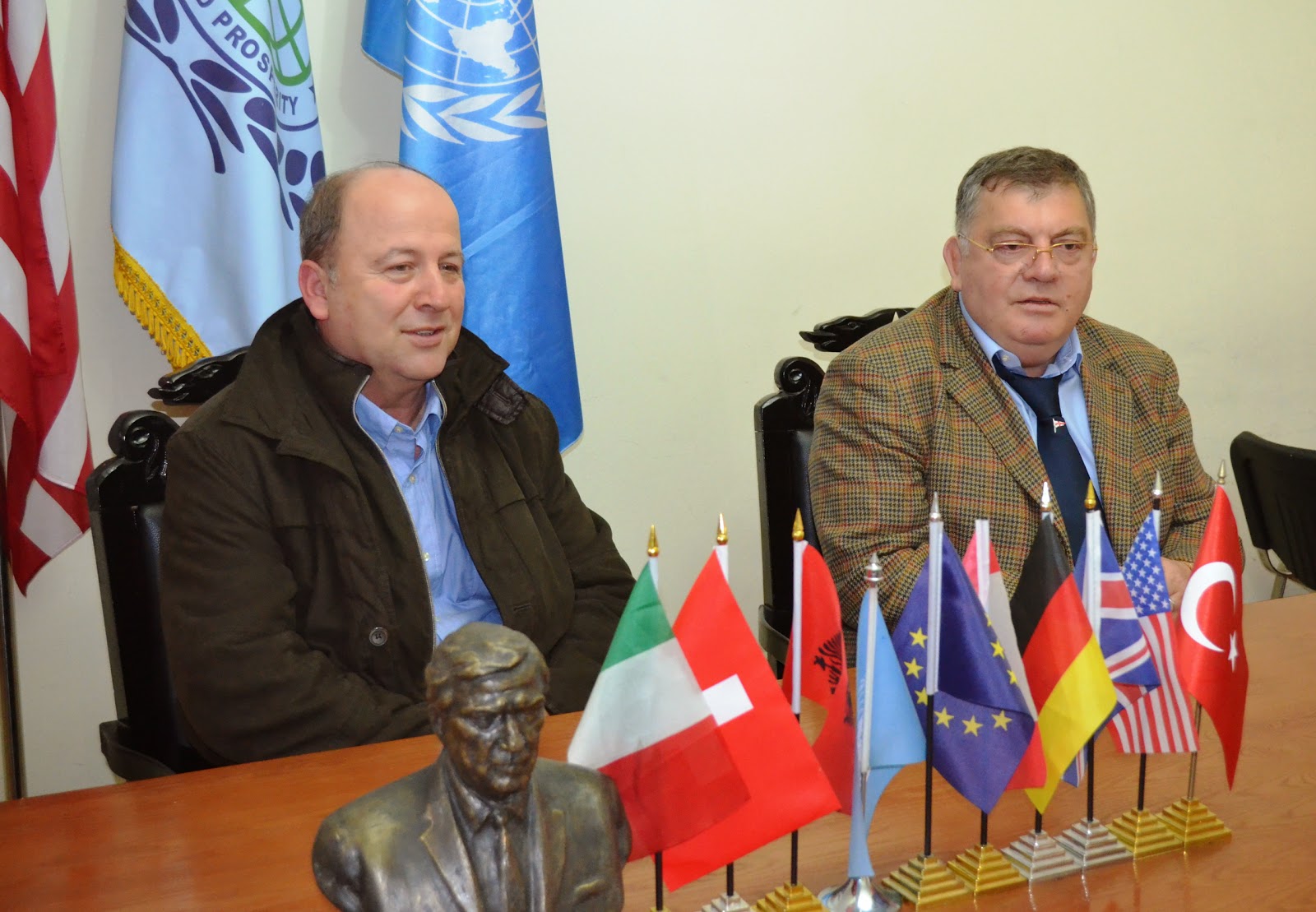 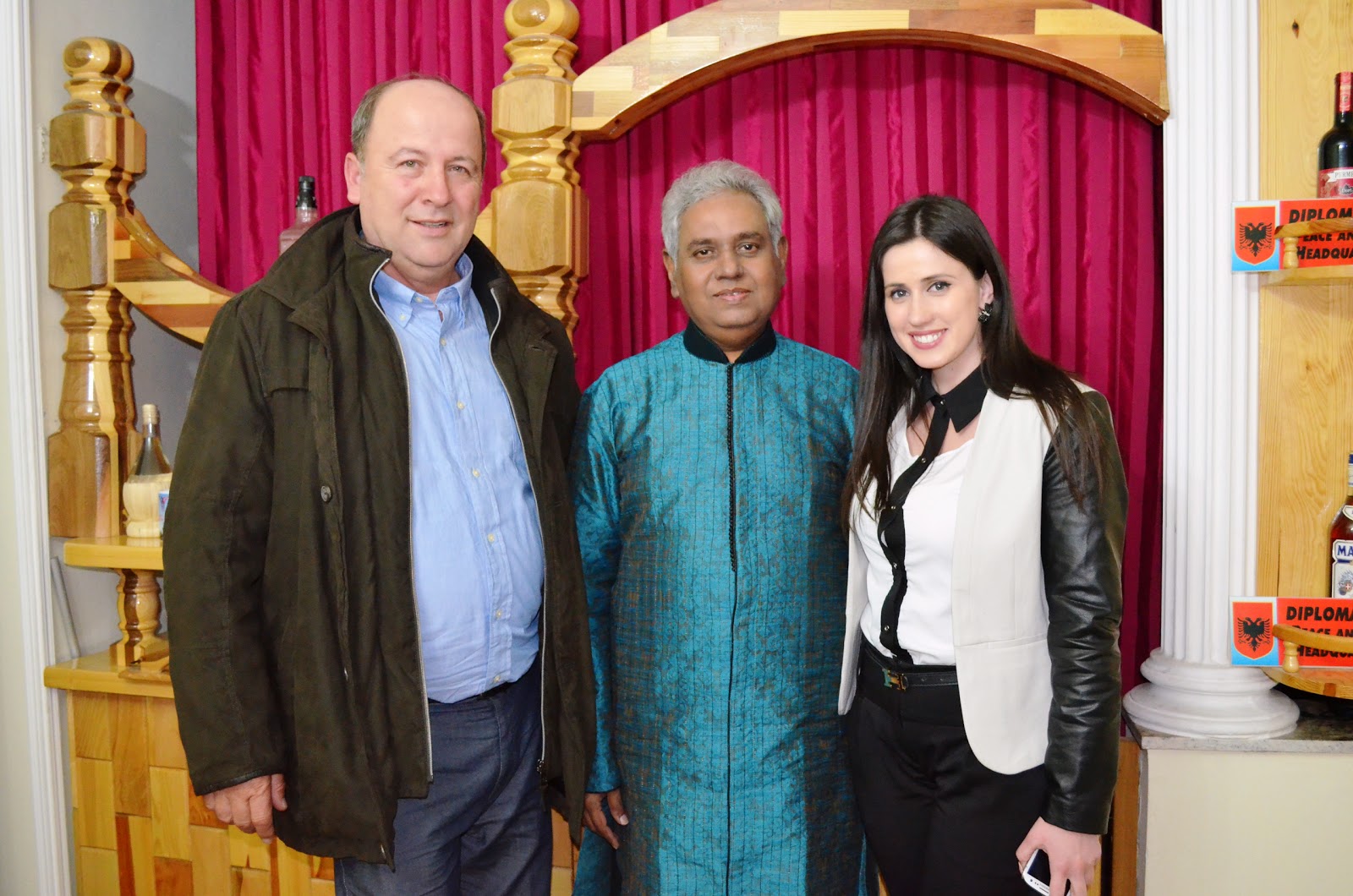 Posted by Academy Of Universal Global Peace at 7:04 AM