His Eminence Dr. Madhu Krishan, The Founder & Chairman Of Academy Of Universal Global Peace -AUGP Confered Doctorate Degree To Mifarete Laze The Ambassador of Albanian Culture, On the recomendation Of H.E Dr. Shefki Hysa The International Governor Of AUGP & Governor Of Diplomatic Mission -DMPP and on the basis of the Resolution passed by the World Governing Council Of AUGP 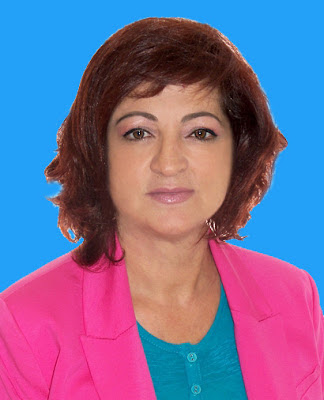 Mifarete Laze (Vekshari) was born in Shkodra, Albania, on 20th 1959 in a family with early patriotic traditions. She passed her childhood in Shkodra and grew up there. She was brought up in Shkoder with the traditions of the area.

Mifarete is a niece from Saranda. Her parents were born in Konispol and Pandaleimon, Saranda. After many vicissitudes of that time, persecuted by the former communist dictatorship, her family sets in Shkodra where the three children were born.
She received the elementary and secondary education in Shkodra. There began also her artistic activity since in the third grade. Firstly, she participated in the festival of primary school pupils and later with the pioneers, the children of the secondary school. She started with the duet “Beni, Mira and the jam”. This way started her artistic life.
Mifarete often says that ” I don’t know how I ended on the stage, I just wanted to sing and my caring father made my wish come true.”
Mifarete Laze in the age of childhood participated in 7 local festivals of Shkodra and in 7 national festivals for children. She won some prices in these competitions.
After finishing the secondary education, she finished the artistic high school “Prenk Jakova” in Shkodra. During this time, she participated in the festivals of the civic song of Shkodra where she won the first prize with the composition of Zef Çoba and after that came other different prizes. All in all, in the song activities in Shkodra she counts seven prizes: two first prizes, three second prizes and two third prizes,
Mifarete Laze has been activated during the years 1970-90 in the activities of the Youth Club “The heroes of Vig”, ”The Student’, “Theatre Migjeni“, “Kino worker“, “The house of Culture of Shkodra”, etc. Meanwhile, she participated in three editions of the folkloric festival in Gjirokastra.
In 1980-1984, Mifarete Laze finished her studies in the Faculty of Literature in the University of Shkodra “Luigj Gurakuqi”.
In 1980 she participated for the first time in the Festival of RTSH where she is esteemed with the first prize with the song “Illegal friends’ and the third prize with the song “Under the olive coronal”.
LMifarete aze came as an innovation in the slow Albanian music and in those years, even though it was not allowed by the communist censorship, the people called her Mirel Mathieu of Albania.
This way, Mifarete Laze started her way as a highly esteemed and valued singer. In that period she won 13 prizes. She was present in the Festivals of the Albanian Radio Television for 14 years  row. And she was one of the favorite singers of the Albanian public.
Mifarete Laze later interpreted also in other editions of the Albanian radio-televisions such as in “Songs of the Season”, “The golden Microphone”, “Magic Song” , “100 Songs of the Century”. She has participated continuously as a guest of honor also in different activities of the folk song in different cities, etc.
Mifarete Laze has represented the Albanian culture with her voice inside and outside Albania, invited as participant in the activities of the State Ensemble such as: in Italy, France, Spain, Turkey, Greece, etc.
In her career in different festivals, Mifarete counts 21 prizes among the best artists of the Shkoder’s songs and all over the country. The civic folk song of Shkodra and the Cham songs, songs of the origin of her parents, of Chameria, such as the song “I love Chameria” grew even more the value of this special voice of the Albanian music.
Mifarete Laze seems younger than ever even today with her golden voice. This singer of Shkodra is now an icon of the Albanian music and has reaped endless success in different stages inside and outside Albania.

What makes the singer Mifarete Laze special even nowadays in the eyes of the public is not only the longevity on stage, but above all the pure conservation with fanaticism of the real values of the Albanian song with which she never made business. She never misused the values of the Albanian song for personal profits like some other singers who have corrupted such rare values.
During her artistic career, Mifarete Laze has been honored with many titles and prizes, such as: the Prize “Çesk Zadeja”, the Prize of Career, Ambassador of Peace, the title “The Honor of the Albanian Song”. She also has been decorated with the title “Naim Frashëri”, by the President of the Republic of Albania, Alfred Moisiu.
Mifarete Laze has given more than 50 concerts and has given all the earnings from these concerts as donations for Kosovo.
Mifarete Laze is not only a distinguished artist, but also a peace missionary. She has given a lot of help for the people with economic difficulties. As a charitable missionary she has been committed to the international lobbying organization Diplomatic Mission Peace and Prosperity, part of UN. Mifarete Laze is a honorary advisor of this mission that operates in the Balkans and all over the world for peace and prosperity.