of the international diplomacy at Oxford Higher Academy governors committee, his noble responsibilities and duties designated towards globally developing and representing the academy soundly in all of its global peace, diplomacy and leadership educational noble mission. 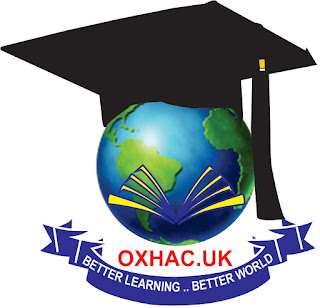 Its great honor for the Oxford Higher Academy to certify that:
MOST Rev. DR. MADHU KRISHAN, DD., FICA., SD(USA)., Ph.D(USA)
Is the honorary governor of the international diplomacy at Oxford Higher Academy governors committee, his noble responsibilities and duties designated towards globally developing and representing the academy soundly in all of its global peace, diplomacy and leadership educational noble mission.

Posted by The American University For Global Peace USA at 7:35 AM No comments:

The Eminent Scientist  His Eminence Dr. Madhu Krishan ,The Founder & Chairman Of " ACADEMY OF UNIVERSAL GLOBAL PEACE" - AUGP, On the Basis of the Resolution Passed By The Governors of  AUGP in 77 Nations Of The World Governing Council ; was Pleased to Honour & Ordain H.E. El Moetasem Bellah Omer Mohamed Faraq as " AMBASSADOR AT LARGE "  Of PEACE & HUMANITY  In EGYPT.His Eminence Dr. Madhu Krishan also Conferred  Upon H.E. El Moetasem Bellah Omer Mohamed Faraq The  Doctorate Degree In PEACE & HUMANITY 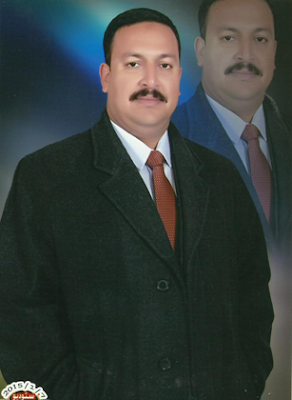 Some Of The Credentials 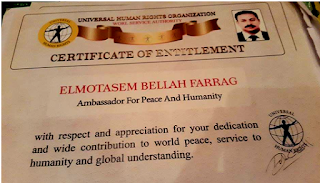 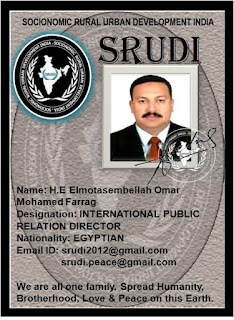 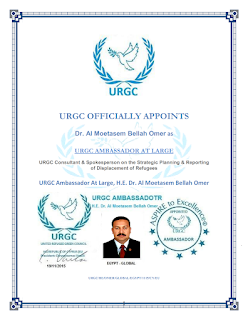 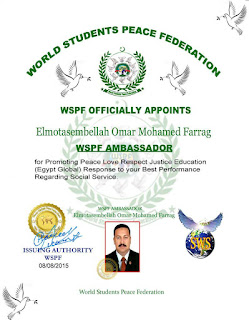 By The Secretary Of  El Moetasem Bellah Omer Mohamed Farag. after His approval
Posted by The American University For Global Peace USA at 7:36 AM 1 comment:

His Eminence Prof. Dr. Madhu Krishan an Eminent Scientist , The Founder & Chairman Of “Academy Of Universal Global Peace” – AUGP , along with all the World Governing Council Of AUGP , CONGRATULATED H.E. HIS ROYAL HIGHNESS HRH ROYAL GRAN VIZIER AMB.Dr. PERCY TAMAYO , The Ambassador At Large Of AUGP IN USA & The Very Prestigious International Awardee Of “ACADEMY AWARD” 2015 For GLOBAL PEACE; On his Decree and Appointment as “ HIS ROYAL HIGHNESS HRH GRAN VIZIER

Posted by The American University For Global Peace USA at 7:17 PM No comments:

Dr. Madhu Krishan also Conferred Doctorate Degree (Honoris Causa) In International Diplomacy   , Upon H.E. Prof. Dr. Abedelatif Hamza  On the bases of the Resolution passed by  The World Governing Council of AUGP  as Passed By The Governors  in 77 Nations - The Branches Of AUGP.

His Eminence Dr. Madhu Krishan also ORDAINED / Commissioned H.E. Prof. Dr. Abedelatif Hamza as AMBASSADOR AT LARGE  Of AUGP in UNITED KINGDOM   and also Conferred Honoris Causa Doctorate Degree, Specialization In International Diplomacy along with a Certificate Of EXCELLENCE  For His Continuous  EXCELLENCE Work For Establishing Global Peace in accordance with the PEACE MISSION of AUGP  which is Building Up a Sustainable Transformed CIVILIZATION Of " PEACE LOVING - PEACE LIVING - PEACE PRACTICING", From 3 Decades.

Founder and President of Oxford Higher Academy/ Diplomacy Peace School for Education and Research
London, United Kingdom
E-Learning
In addition to my main role as the academy managing director, I have been assigned to work as professor at the Oxford Higher Academy in charge of designing, writing and directing two creative innovative very useful master programs, to be ready by Dec 2015:

- MA in Organizational and Global Leadership. This will compose 18 topics/units, written in English, an it will be published soon, thru : www.issuu.com/oxfordhigheracademy

- MBA it will compose 14 topics/ units, it is being written in Arabic and lectured in Libya, UK or online.

Before I have written around 11 books, including:

* Founder and Director of LIDHRA "Libyan International Democracy & Development Association" Established July 2011".
* Founder and Director of DP Academy "Diplomacy Peace Academy for Education and Research" established 2014, Cardiff, UK. Now Named "OXFORD HIGHER ACADEMY.
* I have started by year 2014, and then stopped for while, regarding writing books, on : " The Theory of International Relations and the Fact of the World Peace". The Book In Ethical Diplomacy.., the Book in HR from public admin perspective.
* Experience 29 years, all times was in senior positions, 24 years on the government, 5 years on the oil sector. 3 years computer general manager, 2 years supervising the country budget, 12 Years as senior projects costs controller.


SEEKING TO WORK AS A VISITING PROFESSOR..

May 2014 – Present (1 year 9 months)
In 24th Aug 1983 established the "Central Training & Consulting Center in MIS", it was the first and the only center at that time in the country.
By 1986-1989 conducted a course named the "Advanced Database Management Systems (ADBMS)", for the DBA (Data Base Administrators), in oil sector, this was well known worldwide and it was during this period the art of advanced thinking & designing in management.
In 1987 conducted a course in "Preventive Maintenance Management", this based on the O.R techniques, for the senior Engineers in oil & industry sectors, at that time only few who knew what this means.
By 1990 obtained a permission from the Ministry to renew my Private Training Center license in order to conduct the specialized evening classes.
By 1996 conducted a new course called it the "Steady Employment Theory " .
By 1998 conducted a new course called it " the Interacted Management ".
By 1996-1999 conducted courses in "Computerized Government Accounting & MIS".
By 2011 established the LIDHRA: "Libyan International Development & Human Reliefs Association", and published three books.
By 2014 established the Oxford Higher Academy.. which combines the TRAINING CENTER & & LIDHRA.

July 2011 – Present (4 years 7 months)UK, with rep. office in Libya
DP Academy is registered in UK, with an rep. office In Libya.


The Academy provides peace & diplomacy studies, adapts better learning for a better world.
Where it integrates peace studies into its educational and training programs.
Currently specialized on providing an innovative MBA in Diplomacy. And GOV.MGMT professional program designed to development the management condition and futures for its targeted Arabic region.
DP Academy seeking academic collaborations and financing aids in order to expand according to its peace plan.
DPA aiming to be established as the biggest and best peace specalized non-profit, private, independent academy serving the entire arabic countires learnining needs.

1989 – 2014 (25 years)Libya
Assigned as ministry sector computer manager on 1996. I was in charge of establishing the finance national information center according to UN Resolutiom on 1989 with respect to countries national centers. I was in general manager level reporting directly to vice-minister.
Education

1986 – 1986
Activities and Societies: This degree granted based on developed integrated computerized accounting system for RASCO oil & gas inc, Libya. Using advanced DBMS. using mainframe central computer. Where ASTON UNIVERSITY replied to me according to such design structure&application sources&full user-technical manuals i have written then plus the fact of working a huge mainframe Aston University said such experience is beyond thier MSc in IT. They said the topics will not benefit you

Languages He Knows  are :-

By The Secretary Of H.E. Prof. Dr. A. Hamza
Posted by The American University For Global Peace USA at 6:33 AM No comments: