World News | New York | UCHE AGU Became Dr. UCHE AGU after receiving the Doctorate Degree ( Honoris Causa ) and many other very prestigious Awards, Titles , from The Academy and University , " AUGP USA " www.augpusa.org and "UNUGP USA" www.unugp.education , From it's Founder and Chairman His Eminence Prof. Dr. Madhu Krishan and it's Chief Governor His Excellency Dr. Kiwi Kalloo ; after 6 weeks of intense teaching and Training Program which was well attended by many Hon'ble Prime Ministers , Chiefs Of many Nations, Kings, Queens and top Leaders from several Countries . 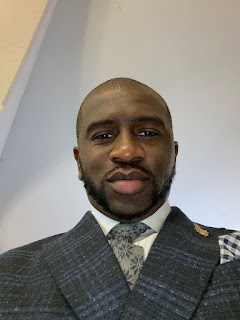 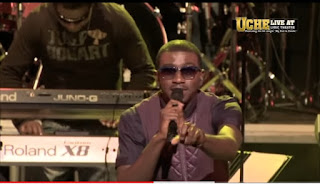 "The inspirational songs that make up the 17 tracks on his  album were produced to build a bridge between African and the American worship and gospel sound,” says 35 year old Uche Agu of his third solo album entitled, “The Glory Experience|Live in Houston”. Determined to reach millions globally as he’s successfully done in Africa, Europe, and the Caribbean, Uche has infused his musical brand with vibrant sounds of techno, rock, reggae, Latin and traditional gospel sound with the roots of raw African rhythm.

Uche garnered fame in the Africa diaspora as the soloist on the South African musical ensemble Joyous Celebration’s contagiously popular hit “My God is Good”. “This song is now at the core of praise and worship at most church services weekly, so much so that I can assure you there isn’t one African Christian around the world who does not know of this song”, says Uche. With well over 2 million views on YouTube since its release in 2009 and captivating audiences as the headline performer for over 70,000 on tour through the African Continent. Uche’s popularity led him to perform for some of the largest congregations in the United Kingdom, such as Kingsway International Christian Centre with Pastor Mathew Ashimolowo and Victorious Pentecostal Assembly with Pastor Alex Omogudu, in addition to headlining grand gospel events in Amsterdam, Italy and Germany.

In 2011, Uche touched down in the United States for the first time and he was immediately embraced by many in the American gospel community and toured extensively. He has since ministered alongside the likes of Bishop T.D. Jakes, Minister Byron Cage, Israel Houghton, Dr. Ron Kenoly, Charles Jenkins, Dr. Juanita Bynum and Pastor Donnie McClurkin with whom he shared the stage at the 40,000-seat Accra Sports Stadium in Ghana.

“It is now my goal to spread God’s message on a global scale. In doing so, this album will go down in history as one that helped pioneer the next sound of African gospel

“The intro track is a remix of `My God is Good’ and it’s mind blowing. It leaves the raw African praise and worship sound of the original version behind and gives it a new sound by adding African American singers, an orchestra and a contemporary gospel sound. Not only is this appealing to a more universal mainstream gospel audience, it takes the chart topping hit to new heights and propel it to touch the hearts of millions more around the globe” says Uche.

The common thread uniting the assorted sounds of the album is the mission behind each track. Uche brings the hard driving force of praise and worship to anthems such as “Make God Big.” There’s a Caribbean-Latin fusion on “All Over” and a soft rock motif on “Yahweh” Tracks like “No Way” balance a little Reggae with a little gospel for a little fun chanson that is a sincere declaration of faith. “My music talks about God, His love, and the relationship he desires us to have with Him…you can expect that message to be very soulful and uplifting through my music,” he says of his goal to reach believers with his broad musical paint brush.

During the recording of “The Glory Experience” Uche was inspired to write a single dedicated to the Nigerian girls who were recently kidnapped by the Boko Haram terrorist militia. The uplifting track “Bring Hope Back Home” aims to identify the ongoing issues that led to the abduction while shedding light on the everyday issues

African women and children face. “The title alludes to the need to bring hope to Africa and raise attention to many problems such as hunger, homelessness, abandonment, exploitation, and school drop-outs,” Uche adds.

Uche’s aggressive mission to connect globally through his music comes by no surprise. He is amongst 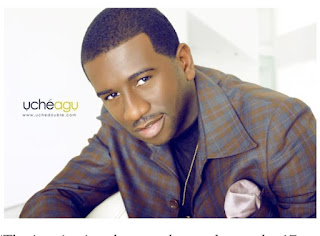 a new breed of worship leaders that feels God is positioning them to incite revival amongst a new generation of believers through praise and worship. He was born into a family of faith in the eastern part of Nigeria, Onitsha in Anamra State where his parents Isikaku and Lovelyn Agu were pastors.

The energetic child began to preach and sing at the age of 3 as he attempted to minister to his own family members. His father prophesied that the child would become a minister of music and he became one before he finished high school.

After high school Uche moved to Kenya and served in the Redeemed Christian Church of God in Nairobi. While on a missions tour in South Africa preaching the gospel with fellow church members, he didn’t realize he would soon return and settle in South Africa where the next phase of his life would unfold. Uche received a Diploma in theology from the World Harvest Theological College and also served as the minister of music in several churches in Africa.

In the midst of fulfilling his calling to spread the gospel, Uche has a burning desire to give back to his community and support the less privileged around the world through his ministry. The Messenja Foundation was birthed during a visit to the town of Klaas Creek, close to Paramaribo, the capital city of Suriname in South America. Uche’s heart was touched in an extraordinary way while visiting small villages where African natives migrated and settled in search of a better life. “It was placed on my heart to plant seeds in those small villages that will grow and spread messages of hope, faith, love and unity through the Foundation” says Uche. The Messenja Foundation will also serve as a showcase platform for hidden talent in music and the arts that often go unnoticed in underprivileged communities. The foundation is expected to be fully operational in 2015.

Some Video links of his famous Songs, events can be seen in the following links below :-

Below are some of the Certificates, Diplomas by which Dr. UCHE AGU was honoured with 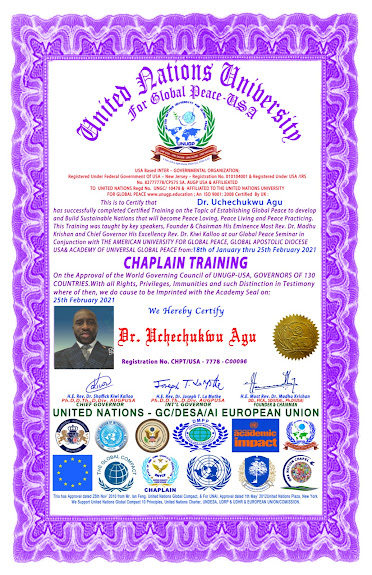 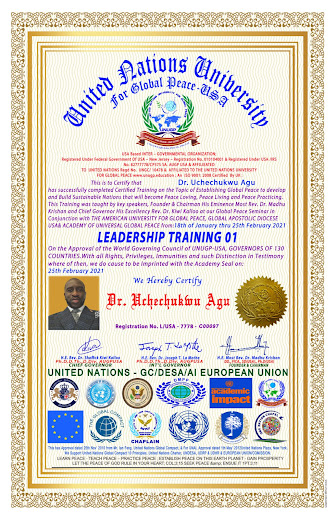 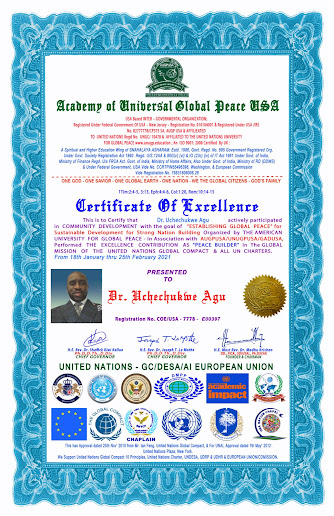 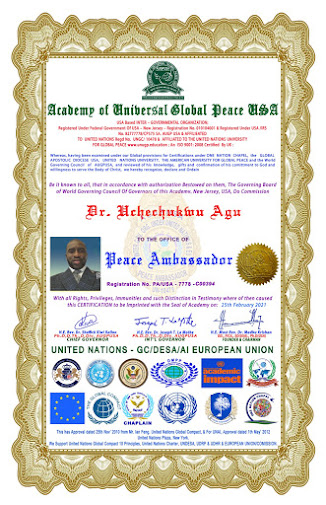 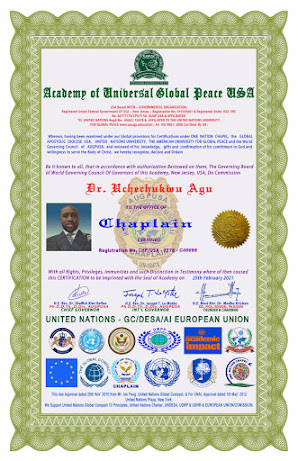 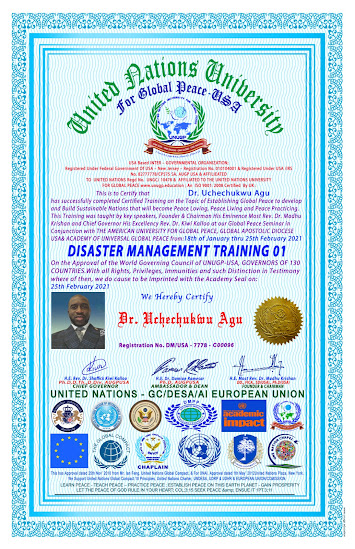 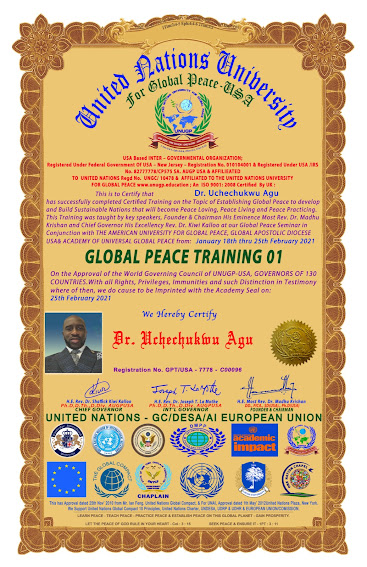 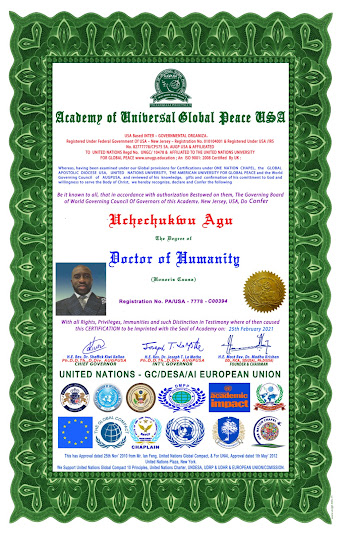 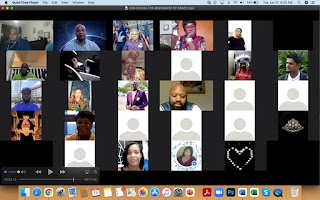 Posted by The American University For Global Peace USA at 9:04 AM 1 comment: