World News | New York | Padmashree Dr. Kalpana Saroj who is the old Alumni of our The American University USA is inducted in AUGP USA Groups of Global Peace Universities as AMBASSADOR AT LARGE to represent all our organizations, Universities in all the Countries . Prof. Dr. Madhu Krishan The Chairman Cum Chief Rector / Chancellor ,Prof. Dr. Lakshman Madhurasinghe the Vice Chancellor and all the Governors , Senate Members and the Governing Council has expressed their thanks with gratitude and greeted the Padmashree Awardee from The Hon'ble President Of India Her Excellency Dr. Kalpana Saroj to become the AMBASSADOR AT LARGE of The American University USA , UN University USA and AUGP USA Groups having branches in more than 120 Countries . 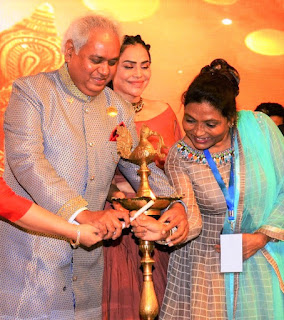 Posted by The American University For Global Peace USA at 5:55 AM 1 comment: